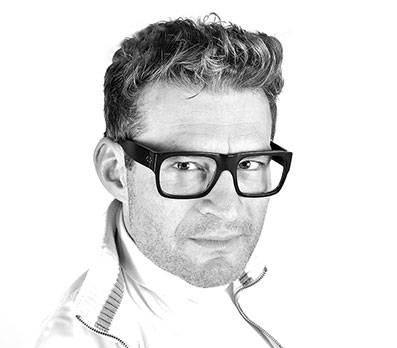 
"Creating my artworks helps me understand the connection between the human soul and the energy of music, musical instruments and other music related elements."

Jens Ritter is a German artist. He grew up in a musical environment which aroused his passion and love for the electric guitar. After his studies of mechanical arts, his focus was creating avant-garde guitars for Prince, George Benson, Nile Rodgers, Lady Gaga and other major music production artists.

At some point, Ritter's guitar sculptures left their traditional purpose and turned into abstract art pieces to express his interrogations about the contemporary and future purpose of music and its technical elements, as well as its interaction with human nature. Later on Jens Ritter added music and recording equipment to create his art pieces and installations.

The aim of Jens Ritter's mission is to explore the inner nature of the electric guitar in particular, and its impact on human culture. His chosen path is to delve into the different elements of the electric guitar; such as the language of shapes, sounds, and their interactions with the viewer.

His art pieces are materialized ideas used as a medium for his quest to understand the impact of the electric guitar culture on his generation.

Jens Ritter's artworks are collected by major museums like the Smithsonian Museum in Washington D.C, the Boston Museum Of Fine Arts, the MET - Metropolitan Museum Of Art in New York City, among others.